"Don't try to win over the haters, you are not the jackass whisperer"
Quote captured by @MikeTibbles by @BreneBrown 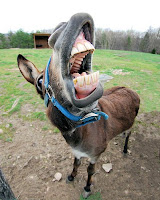 A few years back I was on the receiving end of a rant from a representative of a foam plastic manufacturing company who was upset I had been encouraging exhibitors to discontinue use of their product in displays and shipping materials. The event was for one of my first major clients. The complainant was one of their tradeshow exhibit sponsors.

I attempted to remain calm. I let her blow off steam, and vent. I expressed empathy for her frustration, but was careful to not apologize. I took a few breaths and explained why we were discouraging use of the materials. We had a mandate to plan a sustainable event from the host. We had learned foam-based plastics were non-recyclable in the majority of cities this event visited. This was contributing to waste, which the event was also being charged for. In addition, we were trying to respond to requests from exhibitors about simple steps they could take to voluntarily align with the sustainable mandate of the tradeshow.

Needless to say, she was having none of it. She was annoyed. Highly annoyed. And she was calling the Director of Sponsorship and Exhibits.

I thought I'd lost a major sponsorship. My client was going to be livid. I could kiss goodbye to my contract with them.

To my extreme relief my client stood behind me. They upheld inclusion of the voluntary guideline to reduce and eliminate foam-based plastic. Not only that, but a few years later the event shifted to make the guidelines mandatory for all exhibitors.

I realize now there was nothing I could have done to change the sponsor's mind, unless I was prepared to sacrifice something important: the responsibility I'd been given to ensure integrity in the guidelines we were creating. Definitely a risky choice in this situation that could have easily backfired. The experience highlighted for me the critical importance of so many things:
Because at the end of the day, I realize some people will passionately express their position to someone who doesn't share it in an effort to convert them. And while I can be a stubborn jackass, I am also not a jackass whisperer.
Posted by Shawna McKinley at 13:01

LOVE This! so very true and often hard to remember when you're in the throws of something like this.

So often, the focus is on retention...but all too often that is not in the best interest of an organization.

Great job sticking to your guns and so happy to read that your client supported your stance!

Hi Amy - thanks for the comment and support! It's definitely a tough balance to try to strike sometimes but am glad it worked out in the end and am MUCH appreciative of the client's support. It's a tough stand for them to take, too!

Tips for Greening Your Meeting Destination